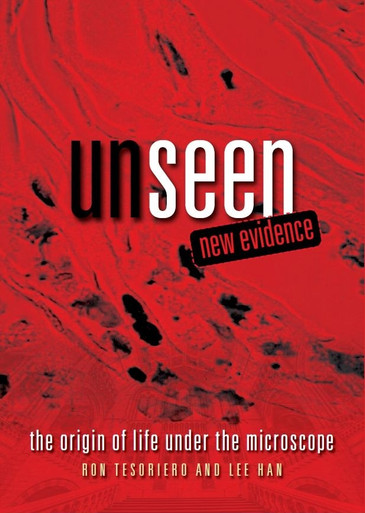 The inspiration for the writing of this book came as a result of the consideration by Ron Tesoriero of the facts and scientific findings in his examination of a case of a Communion host that spontaneously transformed into what seemed like flesh and blood, in Buenos Aires, Argentina, in 1996.

In the course of that examination, one of the Forensic Pathologist who was consulted, said that if this story was true then scientists would need to rethink some of the most fundamental concepts that they have developed in Science.

The fundamental concepts of science at issue here, Ron has deduced to be, are the accepted foundational principles of Biology to do with the Origin of Life, the Cell and the Evolution of Man.

In this book Ron Tesoriero and Lee Han review the prevailing scientific views on The Origin of Life and the Darwinian Theory of Evolution as taught in the science class at school and universities and now placed on the table for serious reconsideration is the new evidence that comes from the Buenos Aires case.

The book also introduces other cases of the replication of the Buenos Aires phenomenon, strengthening the case for science to reconsider widely held and fundamental assumptions about life.

The facts, the scientific findings and the arguments presented in this book will have a major impact on scientific and religious thinking causing the book to be perhaps one of the most significant books of our age.

“I am not religious… but find the book to be a convincing argument in favor of a Creative Agency over stepwise evolution.” said Dr. Robert Lawrence, Forensic Pathologist and son of the famous Nobel Prize scientist, Ernest Lawrence, who invented the Cyclotron which started the nuclear age.